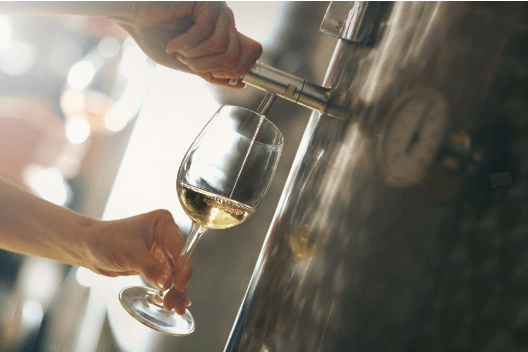 What are wine lees?

The word ‘lees’ is used to define the heterogeneous matrix that is deposited during pre- and post-fermentative decantation of must and/or wine. It is the residue/sediment that settles at the bottom of vessel after pressing, fermentation, during the storage or after specific treatments, as well as the residue obtained following the filtration or centrifugation of wine.

What does lees consist of?

Wine lees consists of dead yeast cells, the cell membranes of pulp, stem and skin fragments, insoluble salts and macro-molecules. Basically, all the components that are deposited during the making and ageing of wine. Over the course of winemaking, the lees are progressively depleted of their constituents due to decantation processes and their exact composition varies depending on the origin of the grapes, the grape variety and the winemaking processes applied.

Lees contact is where the newly fermented wine is deliberately left in contact with the lees (and thus not decanted) therefore allowing a period of contact. Over time, yeast cell components are released into wine due to both the passive transfer from cells and their autolysis. Lees contact is becoming increasingly popular in modern winemaking, although it is not a new technique as it is part of traditional winemaking in many parts of Europe. It is most commonly associated with white winemaking where the term ‘sur lie’ or ‘on lees’ originated to describe the practice.

Lees contact can take place during various stages of the winemaking process, from the large tanks used for fermentation, all the way to the bottle, however it is often performed in an oak barrel.

Wine lees is complex and rich of wine active compounds. During ageing, autolysis (the breaking open or rupturing) of the yeast cells modifies the composition of lees and compounds such as mannoproteins, polysaccharides, fatty acids, amino acids and enzymes are released by the yeast lees into the wine during post-fermentative contact.

How long does it take?

Bâtonnage is the French term for stirring settled lees back into the wine to enhance extraction. The lees are periodically re-suspended by stirring to increase the amount of compounds extracted into the wine. Note that the periodic stirring of lees has certain pros and cons which should be considered.

The different types of lees

There are fine lees and gross lees. Gross lees are the larger sediments in the juice/wine. Fine lees are the smaller, finer particles that settle at a slower rate. Wine ageing on lees is usually performed with fine lees originated after alcoholic fermentation (with or without some racking operations).

The stirring of lees encourages continued cell viability, and while it has been shown that cell viability is not an important factor in the improvement of organoleptic properties associated with lees contact, viability does encourage the assimilation of residual sugar. Therefore, a small amount of stirring at the end of fermentation is recommended.

Due to the oxygen scavenging potential of the lees, a reductive environment is created. Care should thus be taken, especially when performing lees contact in stainless steel tanks, to avoid the formation of reductive sulphur compounds. It is advised that the wine and lees (be sure to obtain a sample of the lees from the bottom of the vessel) is smelled and tasted frequently as sulphur off-odours may occur rapidly. If at any point you experience unpleasant aromas, the wine should be racked off the lees immediately. The lees may sometimes smell bad but the wine is not yet affected. The earlier the detection, the faster the appropriate action can be implemented to minimize further damage.

Lees contact can be an advantageous process if done carefully and managed correctly. The entire process should be monitored during the lees contact period and action needs to be taken immediately at the first sign of off aroma formation.