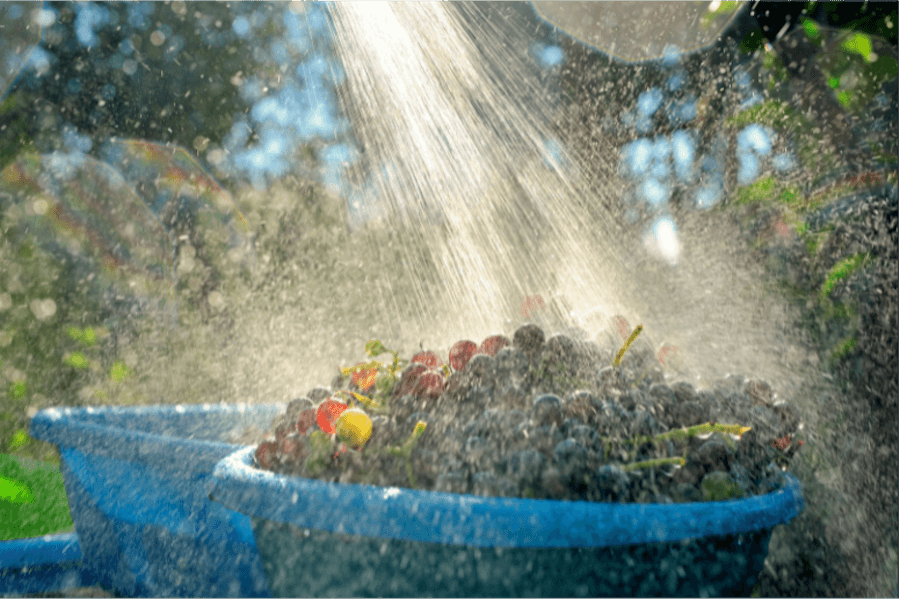 Proper sanitation practices in wine cellars prevent the development of undesirable microorganisms. It is essential that all equipment used during the harvest is cleaned and sanitised effectively before, during and after harvest. Ensuring clean equipment is the easy part, but one often forgets the multitude of microorganisms living on the waxy coating on grape skins. Grape juice, rich in sugars and nutrients, is a suitable substrate for the growth of many species of microorganisms, including yeasts, bacteria and moulds. Some of them good, some of them bad. Other unwanted compounds often present on the surface of the grape berry includes fungicide residues and metals. If transferred to the juice, it could hamper fermentation and affect the sensory properties of the resulting wine.

Sources of the different micro-organisms include the

Grapes are usually crushed without washing, so crushed grapes contain several non-grape substances and many microorganisms. While the washing of grapes is a time and resource-consuming practice one cannot help to wonder what the effects of washing grapes would be on the juice composition. Will the washing of grapes be able to effectively remove pesticide residues and/or pollution from the grapes? How much of the natural yeast will be removed by washing grapes and how will this affect the fermentation?

An Italian group conducted a study1 to investigate the effect of grape washing on the pesticide and metals residues as well as the yeast populations. The results were presented at a symposium on Microbial Food Safety of Wine in Vilfranca de Penedès, Spain in 2007. The authors evaluated the effects of grape washing on a commercial scale.

The concentration of metals (copper, iron, lead, zinc) was also significantly reduced in the washed grapes compared to the unwashed grapes. This effect was especially noteworthy when looking at the data obtained from the Cabernet Sauvignon grapes, likely due to the longer skin contact times resulting in higher extraction of the metals from the skins. These relatively higher values could affect the performance of the yeasts in the fermentation of the unwashed grapes.

Oxidised glutathione (oxidation marker) concentration was two times higher in the musts obtained from unwashed grapes when compared to washed grapes, while the oxidised glutathione content in the wines made from unwashed grapes was five times higher than the wines obtained from fermenting washed grapes. This would suggest that the washing regime removed components such as oxidation enzymes and microorganisms that could support oxidation reactions that were present on the berry before processing, thereby reducing the number of oxidation reactions that took place.

The natural microflora of grapes is highly variable, mostly due to the influence of external factors such as environmental parameters, geographical location, grape cultivars and application of phytochemicals on the vineyards. These microbial communities play an important role during the winemaking process, as they metabolize the sugars from the grapes and produce a whole set of secondary metabolites that influence the wine aromatic quality.

The washing of grapes might have some benefits in certain situations, such as grapes with a high concentration of residual pesticides. Even though the washing of grapes can reduce the microflora population, enough natural yeast was preserved to conduct successful spontaneous fermentation. The washing regime might be excessive in normal conditions and will likely not result in significant advantages when compared to an unwashed counterpart.