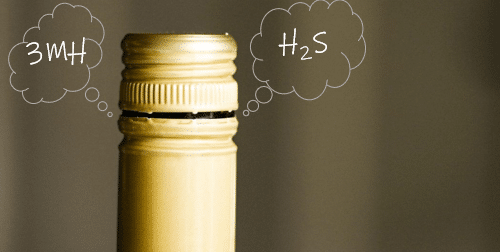 With Sauvignon blanc bottling steadily underway in most cellars, it is important to consider the potential change in wine composition after the final sealing of the bottle. One of the factors that can significantly influence the aromatic composition of wine, is the development of reductive off aroma, post-bottling.

Sauvignon Blanc aroma impact compounds include the oxidation sensitive volatile thiols, particularly 3MH, 3MHA and 4MMP. These compounds need to be preserved as best as possible to maintain the fresh and fruity characters of wine. The use of a low oxygen transmission rate (OTR) closures (such as most screw caps) as well as the use of antioxidants (such as SO2) are employed to minimise oxygen exposure, and oxidation after bottling.
Unfortunately, this reductive environment also increases the risk of reductive aromas developing, leading to undesired flavour characteristics in the wine.

A common practice by many wineries is to add copper sulphate immediately prior to bottling to prevent the formation of reduced off-flavour post-bottling when low OTR closures are used. Other than the addition of copper sulpate, many producers add antioxidants such as SO2, ascorbic acid and glutathione (GSH) containing products, prior to bottling, in order to protect the wine against oxidative degradation.
The need for SO2 alternatives, driven by the consumer, necessitates the investigation of other antioxidants, such as ascorbic acid and GSH containing products. The question is, what is the effect of these additions on the wine aromatic composition during the ageing period?

In the current study, the researchers investigated the effect of
copper and GSH addition prior to bottling on the evolution of
key aroma compounds such as 3MH and H2S in Sauvignon Blanc
wine stored under different regimes of oxygen exposure.

A Sauvignon Blanc wine was bottled with the following additions:

In this study, the wines were also stored under different conditions in terms of oxygen exposure (wines stored under air and wines stored under nitrogen). This test reported very interesting results and will be summarised in a follow-up blog post. The current blog post will only look at the effects of the addition of GSH and/or copper in storage conditions where air was excluded.

3MH is one of the volatile thiols and an impact compound for Sauvignon Blanc wines, contributing aromas such as guava and grapefruit. In general, the concentration of 3MH will either remain stable during short term storage or decrease during oxidative storage and/or storage for longer time periods. In the current study, as expected, a decrease in 3MH was observed for all treatments.

The powerful antioxidant capacity of GSH resulted in a wine with an approximate average of 200 ng/L more 3MH after six months of storage compared to its no-GSH counter treatment. The preserving effect of GSH was especially evident when comparing treatments where copper was also added. GSH, therefore, is effective in preserving the volatile thiol content and the tropical fruit aromas associated with its presence.

The addition of copper prior to bottling led to the inverse effect (lower 3MH) compared to wines where no copper was added. 3MH decreased with about 320 ng/L in the copper added treatment where no GSH was present. The presence of GSH resulted in a smaller decrease in 3MH concentrations.
The analysis of the wines directly after bottling showed that the reaction of copper with 3MH was rapid and an immediate significant decrease in 3MH was observed in the treatments where copper was added. Decreases in 3MH concentration in the following months depended on the storage conditions, but in general, the concentration did not continue to decrease during the storage period. This initial significant decrease should be considered when adding copper to tropical fruit-driven wines.

H2S is associated with the occurrence of reductive, rotten egg-like aromas in wine. The formation of this compound (and sulphur containing reductive compounds) during bottle ageing, has been well documented but is still not fully understood.

In the current study, wines treated with GSH exhibited higher H2S concentrations than their corresponding untreated samples. This increase could be due to the antioxidant effect of GSH leading to a lower degree of oxidation and an increase of reductive compounds in these samples. However, prolonged heating of GSH has also been shown to result in the formation of H2S, a hypothesis needing further investigation2.

Interestingly, copper addition systematically increased final H2S concentrations during the six months storage period. This result is perversely counter-intuitive, and the exact opposite of what producers are aiming for when purposefully adding copper pre-bottling. The increase of H2S was also amplified when bottled in the presence of both GSH and copper.

Since the publication of this study, various research projects have been completed to investigate this effect. The results and explanation for this phenomenon will be addressed in a separate blog post and will also be discussed in a presentation titled, “How copper additions can increase reductive notes in wine?” during the Stabilization School hosted by Enartis South Africa in the next few weeks.

GSH decreases 3MH degradation over time, whereas copper is clearly rapidly detrimental to this aroma impact compound. On the other hand, GSH, particularly in combination with copper, leads to the formation of the powerful reductive compound, H2S. Clearly, resulting in the opposite desired effect.

So, what now? The mechanisms involved and the practical implications thereof will be addressed in follow up blog posts and publications. Follow us on social media to stay updated regarding this relevant information: