Rethinking Copper for the treatment of H2S 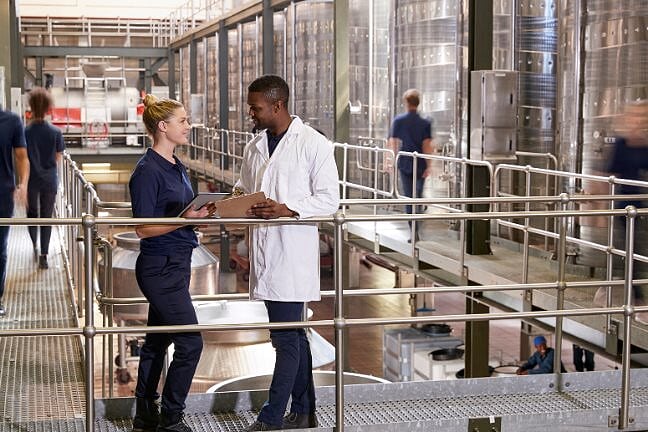 The occurrence of reductive sulphur compounds in wine is a concern to winemakers. As with most wine defects, it is always better to act preventively, but in some instances, there is no other option but to apply the necessary treatments to remove the off odour.

The addition of copper (Cu2+) in the form of copper(II)sulphate is a relatively common remedial treatment for the removal of reductive aroma compounds such as H2S. The Cu2+ ions react with H2S to form the seemingly insoluble copper sulphide (CuS) which can presumably be removed from the wine by racking, filtration or by bentonite fining1.

The standard Cu2+ addition protocol recommends doing bench sensory trials using incremental Cu2+ addition rates ranging from 0.1 to 1.0 mg/L1. Interestingly, when calculating the number of Cu2+ molecules needed for the removal of 10 μg/L H2S (which is around the concentration where the majority of people will be able to pick up the aromatic flaw2), researchers3 discovered that the addition of 0.5 mg/L Cu2+ would result in a 25-fold excess of Cu2+ molecules needed to react and precipitate all the H2S. Therefore, in general, far more Cu2+ is added to the wine than what is theoretically needed to react with all the H2S.

What happens to all this excess Cu2+?

Many wine compounds can bind Cu2+, including organic acids (such as tartaric acid), tannins, polyphenols as well as smaller wine compounds such as H2S and fruity volatile thiols. The binding of other wine components reduces the availability of Cu2+ to bind and remove H2S. By adding Cu2+ in excess, H2S can be removed more efficiently. Theoretically, with Cu2+ in excess, all of H2S will bind with Cu2+ to form CuS, which presumably precipitates and can then be removed from the wine.

However, there is a lack of certainty regarding 1) if all of the H2S is bound by the Cu2+, and 2) the effectiveness of removing CuS from the wine after treatment3,4.

Why is it important to remove the CuS?

Anecdotal evidence from winemakers as well as research conducted over the years has shown that in some cases, the reductive aroma can return after the (initially effective) remedial treatment with Cu2+. This tendency was especially prevalent in cases where wines were bottled with low dissolved oxygen5,6.

It seems that copper plays a large role in this latent formation of H2S. This topic will be addressed in more detail in Part 2 of this blog series. For now, just know that it is important to limit/remove the copper after reaction with H2S or other wine compounds.

There are also several oxidative spoilage issues that can be encountered in wines with elevated Cu2+ concentration. It can accelerate oxygen consumption and mediate reactions to generate yellow coloured compounds7,8.

How effective is the copper removal by racking and/or filtration?

Fourteen white wines were used in the study. H2S and Cu2+ were added to all of the wines at a molar ratio of 1:1 based on the addition of 1 mg/L Cu2+. Therefore, for the sake of the experiment, H2S was added at quantities much higher than what is found in a real wine situation in order to match the “excess” Cu2+ concentration.

The samples were placed at 15°C and settled for one and five days. After the settling period, sampling took place as follows:

These samples were then analysed for residual copper.

No CuS precipitate was observed visually in suspension or found to collect at the bottom of the vial. Chemical analysis also showed that neither racking nor filtration was efficient in removing the CuS. In some cases, a small amount of CuS was removed by filtration, however, the impact was minimal and the largest decrease still resulted in 79% of the initial concentration of copper being present. Allowing the wine to settle for an additional four days also did not result in any significant decreases.

This result was alarming and contradictory to what has been assumed for many years. The research group proceeded to conduct the same experiment in a model wine system consisting only of water, ethanol and tartaric acid to investigate the reaction mechanisms taking place.

In the model wine system, processes such as racking and filtration were marginally more effective in removing CuS. However, there was still only 54% of the copper removed after filtering with a 0.45 μm filter, thus leaving a considerable amount still in solution.

Comparing the ineffective removal of residual copper in a real wine to the improved (albeit still unsatisfactory) removal in a model wine, it is clear that other wine components interfere with the coagulation and settling of the CuS impeding the removal by settling and/or filtration.

Further experiments by the research team showed tartaric acid to be a key component in the wine matrix responsible for hindering the removal of CuS. The presence of tartaric acid leads to the formation of small, possibly nano-sized CuS particles impeding the removal thereof. Other wine compounds can also serve as extra complexing agents and may not only induce smaller particle sizes but also enhance the re-dissolution of particles under oxidising conditions.

To make matters worse, the researchers demonstrated that the added Cu2+ is likely to be active in detrimental reactions in the wine regardless of its binding to H2S and/or other wine components.

Products to improve the removal of copper

Commercial preparations of copper encapsulated in a fining agent such as bentonite or a pre-mixed product containing Cu2+ and a flocculating agent, have been developed over the past few years to improve the removal of CuS and lower the residual copper concentration9.

A preliminary experiment was conducted to test the effectivity of a product (2% (m/m) copper(II)citrate in combination with bentonite). Results showed potential for the removal of residual copper, however, the effectivity was still unsatisfactory and further developmental work will have to be done to improve the effectivity to such a degree that it will be of value to the winemaker.

After treating a wine with Cu2+ with the aim to remove reductive off odours, the removal of the copper complex is important to prevent latent H2S formation. Contrary to what has been believed for many years, a study showed that winemaking processes such as racking and filtration had little effect on the residual copper concentration.

Tartaric acid was identified as the major contributor to the formation of small, possibly nano-sized CuS particles which is difficult to remove. The ineffective removal of residual copper can have major implications for the winemaker. Some products show potential for the removal of CuS, however, further research is needed for the development of an effective product.

Photo by Karim Ghantous on Unsplash