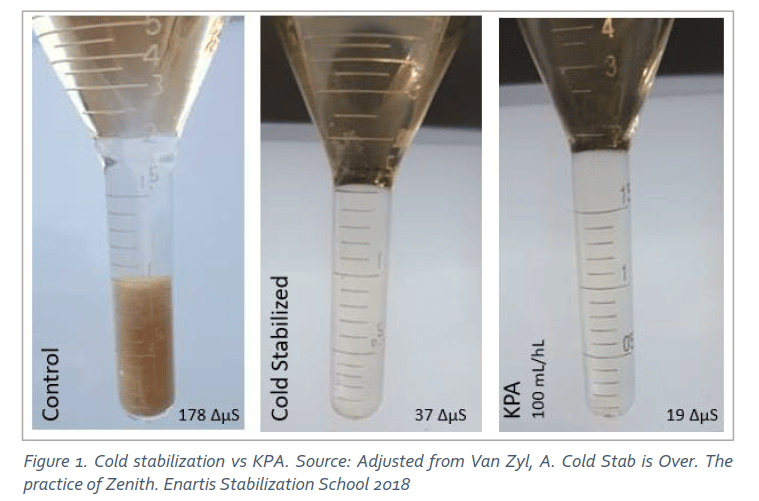 Until now, various additives, such as metatartaric acid, carboxymethylcellulose (CMC), mannoproteins and Gum Arabic showed some limitation to guarantee total tartrate and colour stability in young wine. However, there is a new kid on the block making headway in wine stabilization:

During the Enartis stabilization school, held in July and August this year, Enartis representative, Antoinette van Zyl, presented fascinating results showing the newest information available on the use of KPA in wine. These results were based on the use of Enartis’ KPA-containing product range called Zenith™, that specifically facilitates tartaric stability while maintaining colour stability. The following is a summary of Van Zyl’s presentation.

WHAT IS KPA AND HOW DOES IT WORK?

KPA is a potassium salt of a polyamino acid produced from L-aspartic acid, a natural amino acid present in grapes. This polymer has a medium molecular mass of around 5 kDa and has a negative charge at wine pH. This negative charge allows the molecule to bind potassium ions in the wine, thereby inhibiting the growth of potassium bitartrate crystals ensuring tartrate stability.

The OIV authorized the use of KPA in 2016 (OIV Resolution 543/2016) followed by the EU in 2017. Since then, the number of wineries using Zenith™ increased significantly, with a 25 % growth observed in the last year for Spain, Portugal and Italy combined.
The use of KPA for the stabilization of wine has also been approved in other countries including Argentina, Australia and New Zealand. KPA is not yet permitted as an additive in wines produced in the USA, however, wine containing KPA may be imported into the country. The use of KPA in the South African wine industry was finally approved in May 2019 and the Liquor Products Act 60 was amended to include KPA as a legal wine additive at a maximum dosage of 10 g/hL.

HOW DOES KPA STABILIZATION COMPARE TO OTHER PRODUCTS?

The Enartis laboratory in South Africa tested the stability of several South African white and rosé wines using both CMC and Zenith™ products (freeze test done immediately after addition). Results from 2019 showed that, on average, KPA (Zenith Uno™) delivered improved stability (20 – 25 % lower ΔμS) compared to CMC for 88 and 80% of the white and rosé samples respectively. Other studies also reported improved efficiency of KPA compared to CMC and mannoproteins while stability was comparable to that of metatartaric acid over the short term.

LONG TERM STABILITY – HOW DOES KPA STABILIZATION COMPARE TO OTHER PRODUCTS?

KPA adds to the “toolkit” available to winemakers for stabilizing young wines. This is especially good news for producers of Sauvignon blanc, a variety that is often bottled while the wine is still young.
Sauvignon blanc is generally perfectly suitable for treatment with KPA, however, as with all the varieties, prior laboratory trials need to be done to ensure the product’s effectivity (especially for high acid wines). 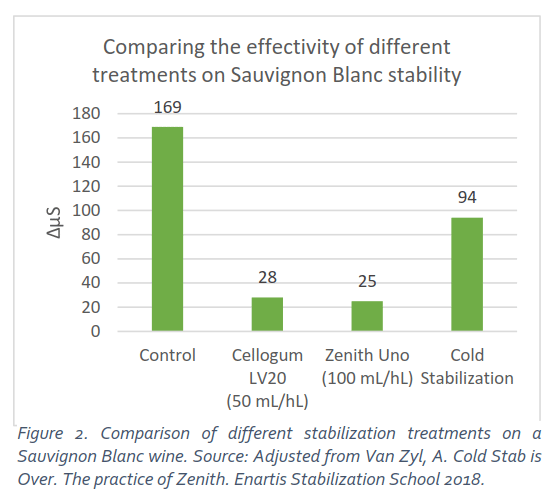 One of the great perks of using KPA for the stabilization of Sauvignon Blanc wines is that it eliminates the oxygen dissolution that often occurs during cold stabilization. Aroma compounds such as the volatile thiols and various esters are important aromatic contributors to Sauvignon blanc, and the preservation thereof is critical. By sidestepping cold stabilization, the risk of oxidation is minimized, and the aroma profile preserved.

CAN I USE KPA ON WHITE AND RED WINES?

Great news, KPA can be used on red wines too!

The effectivity of the product on red wine is quite astounding. A number of images (post freeze test) were shown during Van Zyl’s presentation. These images depicted control samples in comparison to samples treated with Zenith Color™, which is a combination of KPA and Gum Arabic (Acacia verek). Colour and tartrate instabilities were evident in the control samples while Zenith Color™ treated wines showed complete stability at various dosages. According to Van Zyl, these images are not selective, and the laboratory personnel see similar significant results on a daily basis. 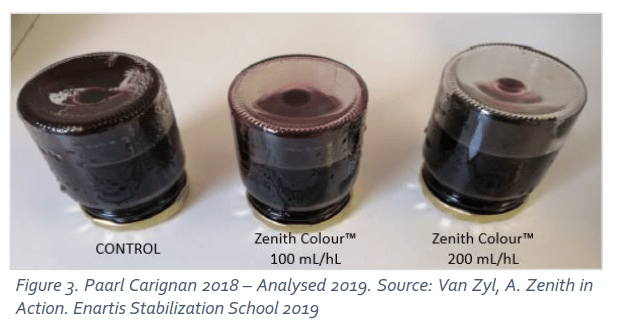 CMC (on its own) is not recommended for the use in red wines as it can lead to colour instabilities of previously colour stable red wines. In this case, the combination of CMC together with Gum Arabic (Acacia verek) is advised to ensure that colour instabilities do not develop. This is where KPA has the upper hand: it does not have the colour unstabilizing effect. KPA can be applied to red wines to stabilize the tartrates, provided that the colour of the wine is stable prior to addition.

WHAT IS THE EFFECT OF KPA ON THE FILTERABILITY OF MY WINE?

Often, heat test results (at 80ºC) indicate unstable results after a CMC addition compared to the test done prior to the addition of CMC. The interaction between the added colloids and proteins, seen in these examples, can also occur due to the addition of KPA (which is also a negatively charged colloid).
It is important to ensure that the wine is protein stable prior to the addition of KPA, however, for peace of mind, there is a method to test the risk of colloidal instability of a treated sample.
The test involves heating the treated wine to 40ºC for three days and then testing the turbidity of the sample. For a treated wine to be considered as colloidally stable, the NTU needs to be below 1.5 after heating. In this way, an accurate prediction of haze formation resulting from interactions between added colloids (CMC/KPA), and wine colloids, can be determined. In some instances, KPA delivers lower NTU values compared to CMC, however, each wine needs to be treated as a unique sample with specific colloidal properties.

HOW WILL KPA AFFECT THE TASTE OF MY WINES?

According to the Stabiwine Research Project (investigating the use of biopolymers for sustainable stabilization of quality wines), the addition of KPA, at the recommended dosages, does not alter the sensory composition of wine.

Due to the simple and rapid application, the use of KPA for wine stability is much more cost-effective and sustainable than alternative options. The application does not involve chilling, racking, water usage or tank sanitizing. 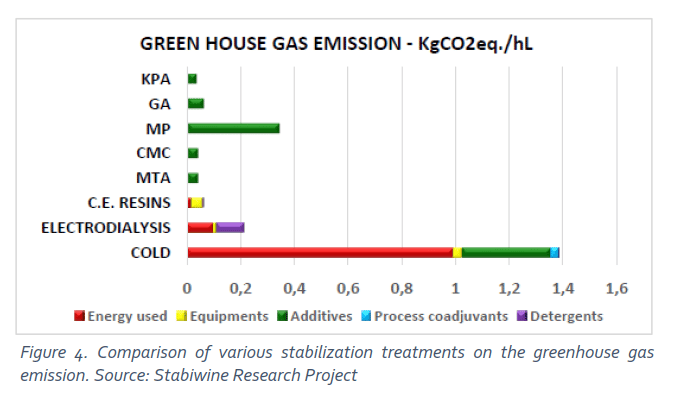 THE DO’S AND DON’TS OF COLLOIDS

KPA has a high stabilising capacity, with a long-lasting effect that has a negligible impact on the wine filterability, no negative interaction with stable wine colour and does not alter the sensory properties of the wine. In comparison to CMC, (other than the red wine colour benefit) it is generally more filterable and has increased effectivity. Sounds almost too good to be true, right? Believe it. It looks like this product is ready to take the South African wine industry by storm, revolutionizing the way we stabilize, especially Sauvignon Blanc, wine!