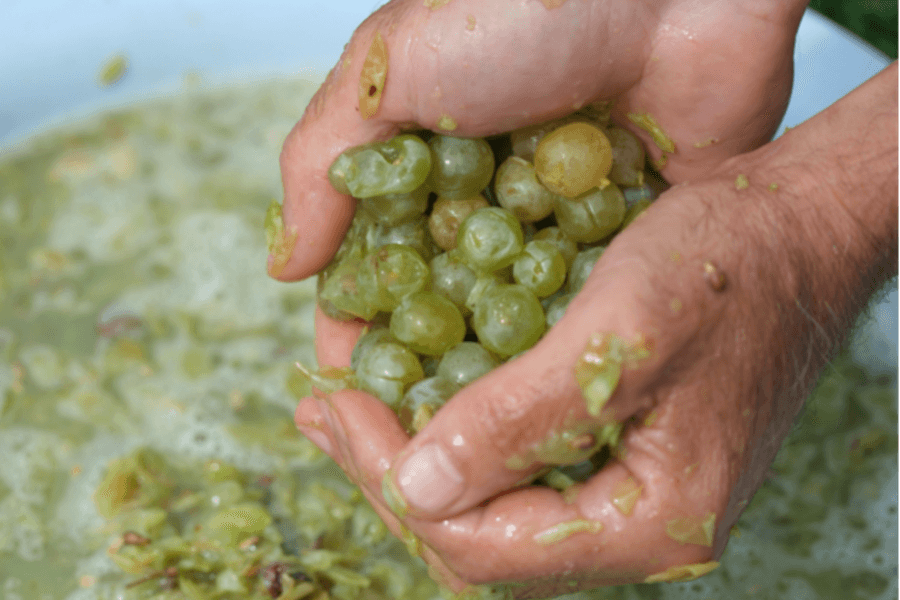 What are the main benefits of clarification?

The benefits of reducing the amount of solids in the juice before fermentation include:

What do the solids consist of?

Freshly pressed must can contain up to 20% solids consisting of small particles of cellulose, hemicellulose, pectin, mineral salts, lipids and proteins. Limited information exists regarding the precise composition of the solids in juice. However, it is estimated that the solids of white juice consist of approximately 70% polysaccharides, 8% lipids and 2.5% nitrogen. Minerals, phenolic compounds and pectins make up most of the remaining solids %.

Most grape-derived solids have a particle size of less than 2 μm in diameter, however, once fermentation commences the size of the particle decreases possibly due to agitation caused by carbon dioxide. Towards the end of fermentation, as carbon dioxide production slows, the particles tend to aggregate to form larger particles, which then settle with the yeast lees.

How does the solids influence fermentation?

Solids have a considerable influence on fermentation and juice with a high solids concentration usually fermenting at a faster rate. Solids provide essential nutrients such as lipids and nitrogen for healthy yeast metabolism and yeast cell development. Lipids are an important component of the cell membrane, which help protect the yeast cell from the increasing alcohol concentration during fermentation. Consequently, fermentations containing a greater proportion of solids are generally faster and less likely to become stuck or sluggish.

How can the solids content influence the composition and sensory characteristics of my wine?

The clarification of the juice before fermentation is essential for aroma development and flavour preservation. Studies have shown that higher turbidity causes lower volatile acidity and reduced acetaldehyde concentrations and higher glycerol concentrations in the resulting wine. An increase in solids also resulted in lower esters concentrations, higher concentrations of volatile sulphur compounds and increased higher alcohols content. This can affect the perception of a wine’s varietal character. With certain cultivars, higher juice turbidity can result in more polysaccharides, irrespective of the extraction method which was applied. This influences the taste of the wine.

How are the solids measured?

There is a good correlation between the solids content and the turbidity of the juice. Turbidity is measured using a nephelometer or turbidimeter, a device that should be standard equipment in every winery that produces Sauvignon blanc wine. The value obtained is reported in NTU’s or Nephelometric Turbidity Units. Unfortunately, this quick and convenient method does not specifically characterise the composition or particle size of the solids present. However, the method remains the most useful way to assess and compare the quantity of solids in individual juices.

What should my NTU be before fermentation?

Different opinions exist regarding the most suitable NTU-reading of white juice prior to alcoholic fermentation. In general, NTU readings of 50 to 150 are recommended as this will ensure that sufficient lipids are available to the yeast. Italian researchers investigated the juice of six different cultivars at NTU levels varying between 15 and 350 NTU. A higher degree of turbidity led to faster fermentations and lower residual sugar concentrations, irrespective of the assimilable nitrogen concentrations. An NTU-reading of 100 resulted in the best balance between the presence of fruity flavours and the absence of sluggish fermentations or reductive flavours.

Yeast manufacturers will specify the ideal range of NTU for the commercial yeast to be used for alcoholic fermentation.

What can I do if my juice is too clear?

Over-clarification can have undesirable effects such as the loss of varietal aroma and insufficient yeast nutrient availability. The addition of fine lees from another tank can be considered to increase the NTU measurement to the desired level. Oxygen additions can also be considered at the end of the yeast growth phase to compensate for the lipid shortage, seeing that yeast can use oxygen to synthesise lipids.

What are the risks of too high NTU present before fermentation?

Most of the polyphenol oxidase enzymes which promote juice browning in the presence of oxygen are found in the grape skin, and therefore high-solids juices may be more susceptible to oxidation. In addition, the concentration of any vineyard-derived pesticides or chemicals in the juice will also increase with increasing solids content.

What methods can I use to clarify juice?

Must clarification is an integral part of white wine production and involves the removal of turbidity causing particles.

Clarification can be achieved via:

The most simple and effective juice clarification method is natural settling—the natural settling of suspended solids followed by careful racking. Settling requires no specialised equipment or training and thus appeals to a large audience. Other juice clarification methods include centrifugation, filtration and flotation. The great advantage of flotation is that it saves time and costs with less pollution and faster production flow.  This technique is particularly well suited for Sauvignon blanc production to ensure rapid clarification and to speed up the onset of fermentation.

How can enzymes help with must clarification?

It is advised that turbid must be treated with a pectinolytic enzyme regardless of the downstream clarification method. Natural settling can be too slow due to the insufficient activity of natural grape pectinase. Pectinolytic enzymes hydrolyse pectins, which leads to increased settling/flotation rate, juice yield, filtration rate and ultimately wine clarity. Pectins carry a negative charge and coat positively charged proteins in grape must, thus inhibiting agglomeration and sedimentation. Haze causing particles can vary in size and very small particles will stay in suspension due to their net negative charge. Bigger particles, despite their net negative charge, will settle out. Pectinase action exposes positively charged proteins, after which flocculation and settling can take place.

Some enzyme preparations also consist of other enzymes with additional functions such as hemicellulase and glucanase which can help break down other structural polysaccharides and metabolites from microbial infections such as Botrytis cinerea or various lactic acid bacteria.