How SO2 speeds up oxygen removal – A research summary

For the most part, oxygen exposure during the production of Sauvignon Blanc wines is detrimental to the aromatic composition and quality. An increase in dissolved oxygen and the subsequent consumption due to oxidation reactions can lead to decreased intensity of fresh and fruity aromas, the development of oxidation characters and the formation of oxidized colour ultimately resulting in the rejection by the consumer.

To better understand how dissolved oxygen is consumed by Sauvignon Blanc wines, Stellenbosch University researchers conducted a study titled, “Oxygen Consumption in South African Sauvignon Blanc wines: Role of glutathione, sulphur dioxide and certain phenolics”1. Only a part of the findings reported in this article will be summarized in this blog post.

Thirteen young Sauvignon Blanc wines were collected under inert conditions from different commercial South African cellars shortly after alcoholic fermentation and prior to SO2 additions. The wines were then divided into two treatments:

One hour after the addition of SO2, the wines were saturated with oxygen by continuous stirring. The wines were sealed hermetically and stored in the dark at 37°C for 60 days. The dissolved oxygen concentration was monitored daily and chemical analyses were done at the beginning and the end of the experiment.

The effect of SO2 presence on the oxygen consumption rate

For all the wines tested, the dissolved oxygen was gradually consumed by the wine over time, therefore inducing oxidation reactions. For some of the wines, the oxygen was consumed at a faster rate. This difference in consumption rate was especially evident when comparing the two treatments (SO2 present or not).

For most of the wines (ten out of the 13 tested) where no SO2 was added, all of the oxygen was consumed by day 40 (Figure 1). The remaining three wines (no SO2 added) experienced a slower consumption and still had some residual dissolved oxygen at day 40. The inherent wine composition and the presence of other antioxidant molecules (other than SO2) in the different wines could explain the difference in oxygen consumption rate between the thirteen wines. 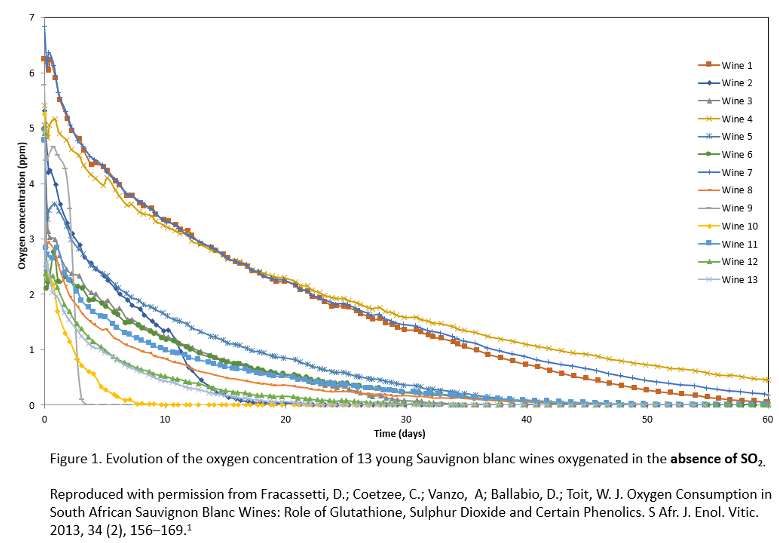 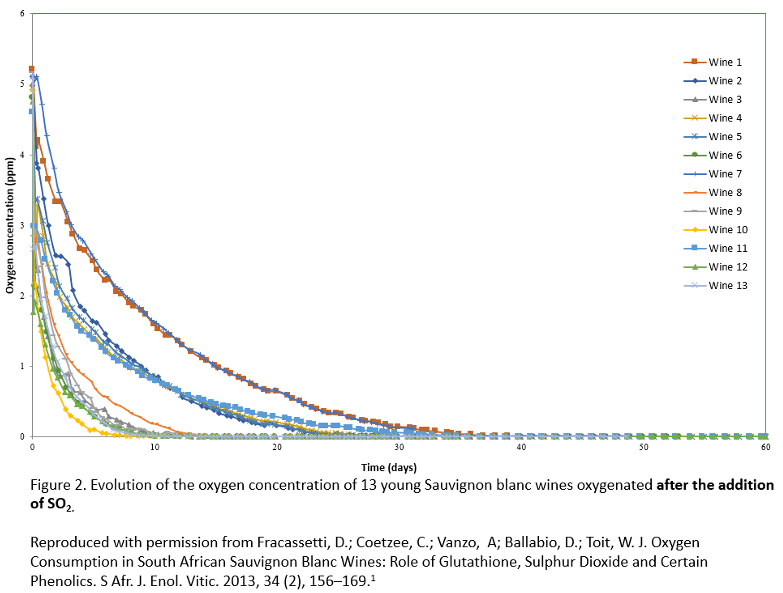 Oxygen does not react directly with sulphur dioxide, but rather indirectly. Oxygen reacts primarily with phenolic molecules present in the wine resulting in the formation of o-quinones and hydrogen peroxide. These compounds are oxidising compounds and can cause havoc in a wine if it is allowed to further partake in oxidation reactions. This is where SO2 is very important. Sulphur dioxide can react with hydrogen peroxide thereby removing the oxidising compound from the wine. SO2 can also react with the o-quinone removing its oxidation potency and even convert it back to the original phenolic format.

What the researchers saw in this experiment is that, in the presence of SO2, the oxidation reactions in wine was accelerated (and therefore the oxygen consumption rate). This is probably due to the rapid reaction of SO2 with the products of oxidation. In the process,  further oxidation is inhibited. Other than that, the reduction of o-quinones back to the original format will allow the compound to be oxidised again, consuming another molecule of oxygen which would not have been possible in the absence of SO2.

In the absence of SO2 (no SO2 added), there is nothing stopping the o-quinones and hydrogen peroxide from causing further oxidation reactions, resulting in further damage and the formation of typical oxidation characters. This reaction could possibly be slower when compared to when SO2 is present, however, it causes much more damage.

Therefore, in the presence of SO2, dissolved oxygen is removed faster from the wine due to the high reactivity of SO2 with the oxidation products. As expected, the free and total SO2 concentrations of the 13 wines decreased significantly during the storage period.

The effect on colour

The change in the colour of the wines was monitored by measuring the yellow-orange colour (420 and 440 nm). A higher absorbance in colour measurements was detected in the wines to which no SO2 had been added indicating the development of an oxidised colour. Other than the protection against oxidation reactions, the presence of SO2 could also have a bleaching effect on the coloured complexes formed due to oxidation.

The effect on phenolic compounds

The major phenolic compounds decreased over time in the presence and absence of SO2. In the absence of SO2, the phenolic content of the wines decreased to a greater degree when compared to wines where SO2 were added. As mentioned previously, the reaction of SO2 molecules with o-quinones inhibits further oxidation and can result in the conversion of the o-quinone back to the original phenolic molecule resulting in its preservation.

The rapid reaction of sulphur dioxide with o-quinones and hydrogen peroxide speeds up oxygen consumption and therefore oxidation in wine, but what is important is the compounds participating in the oxidation reactions. Sulphur dioxide is sacrificed to protect important wine compounds such as aroma and colour leading to the faster removal of dissolved oxygen.

Even though the presence of sulphur dioxide is critical when it comes to protecting wine from oxidation, the other antioxidants present will also affect the rate of oxygen consumption as the difference in oxygen consumption rate between the thirteen wines with SO2 was evident (Figure 2).