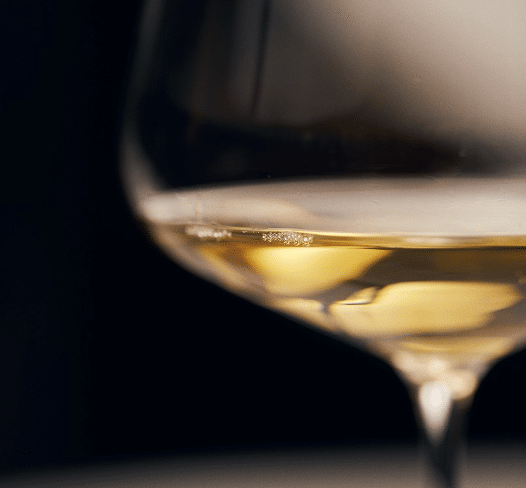 It is widely accepted that the presence of dissolved carbon dioxide will help protect the wine from oxygen pickup (and subsequent oxidation reactions). Often, wines with higher dissolved carbon dioxide content, such as perlé or sparkling wines, are considered to have sufficient protection and preventative measures to exclude direct contact between oxygen and the wine is neglected. To what extent this protective mechanism is in force is not widely known.

The gas-liquid equilibrium is not simple and is further complicated by the fact that both oxygen and carbon dioxide are usually present in wine simultaneously. Two studies focussed on the protective role of dissolved carbon dioxide and how the presence of this inert gas can stop oxygen from dissolving in wine1,2. The current blog post will summarize some of the main findings from these publications.

“Micro-oxygenation of wine in presence of dissolved carbon dioxide1”

Specific experiments using the simultaneous or individual injection of air and/or gaseous carbon dioxide were performed. In most cases, the experiments were performed on synthetic solutions, however, part of the results was validated using real wine1.

Both wines were oxygenated with pure oxygen and the dissolved oxygen and carbon dioxide concentrations were monitored over time.

STUDY B. Oxygenation with a constant source of carbon dioxide2

In a second study, the carbon dioxide content of three litres of degassed synthetic solution (12% v/v alcohol, 5 g/L tartaric acid and pH 3.5) was kept constant by continuous injection of gaseous carbon dioxide. Simultaneously the wine was oxygenated by injecting synthetic air (20% oxygen and 80% nitrogen). The two gasses were injected using two separate porous diffusers and the liquid was continuously stirred. Different flow rates were tested. This scenario is similar to a situation of active fermentation (providing a continuous source of carbon dioxide) where the fermenting must is in contact with air.

Results showed that the greater the flow rate of the gas, the higher the final equilibrium concentration (concentration at which the amount of dissolved gas stabilised) was. 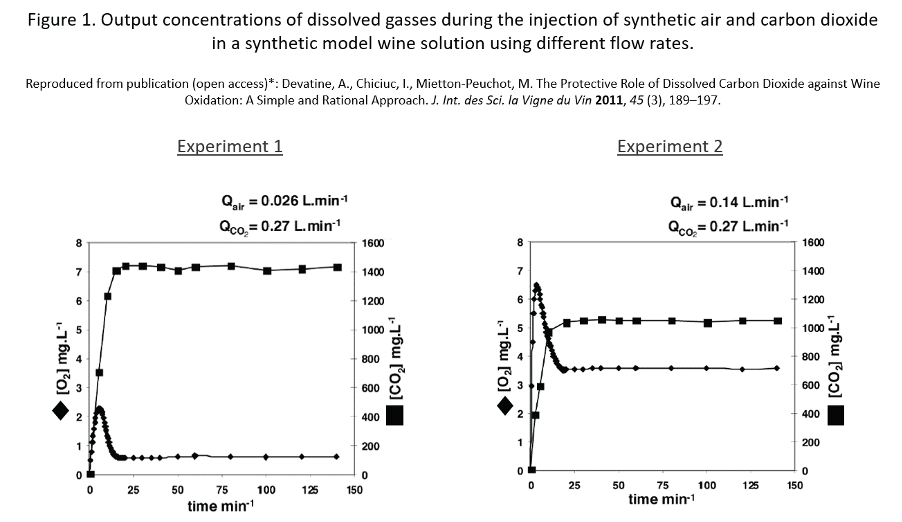 This can be used as a guideline, however, keep in mind that many of these experiments were performed in synthetic model wine solutions. In a real wine situation, the reaction/consumption of oxygen by some wine compounds present could have a significant influence on the dissolved oxygen concentration. 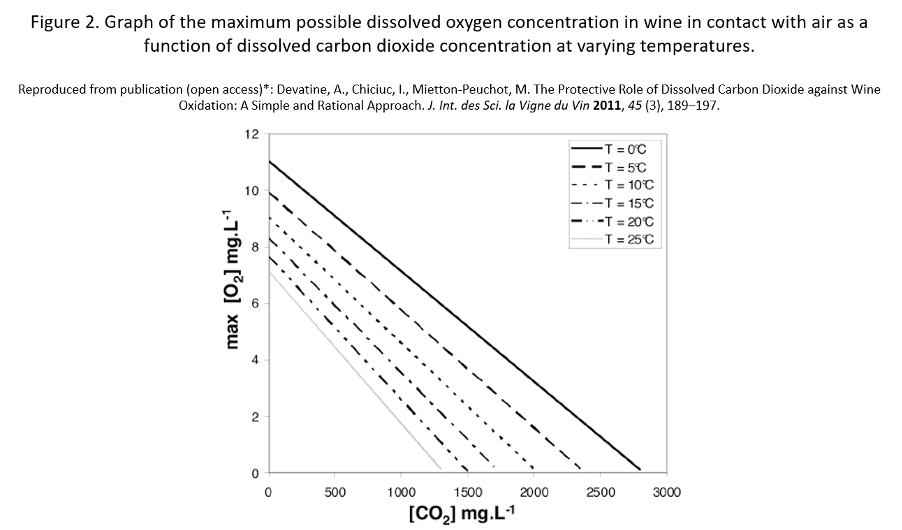 Users are free to read, download, copy and print submissions, search content and link to published articles, disseminate their full text and use them for non-commercial use only (i.e. educational or scientific) with the mandatory reference to the article’s authors and initial publication in this journal.

Photo by Corina Rainer on Unsplash