Carbon dioxide and its sensory influence 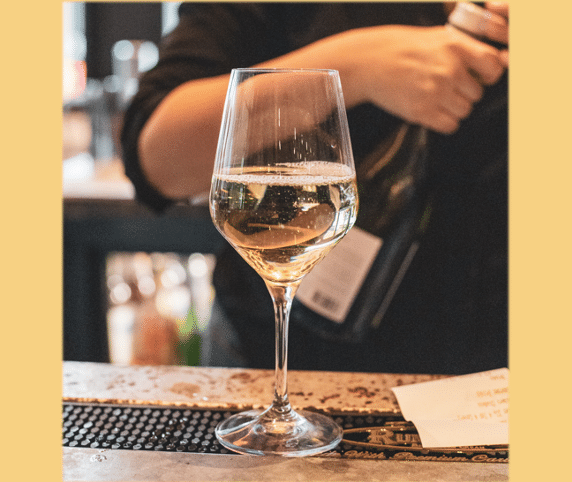 The concentration of dissolved carbon dioxide (CO2) can have a major influence on the sensory perception of wine. Attributes commonly associated with CO2 in beverages include “tingling”, “prickling”, “burning”, “fizzy” and “spritzy” and it is well known that too low CO2 concentrations will result in a wine tasting “flat” and lacking freshness. Typically, dissolved CO2 concentrations in Sauvignon Blanc wines will range anything from 0.8 g/L to 1.8 g/L, however, the exact CO2 sweet spot will depend on the wine style.

The concentration of dissolved CO2 can be adjusted by the winemaker to obtain the desired sensory effect. It can be lowered by sparging the wine with nitrogen gas while carbonation will increase the dissolved CO2 concentration. There are various recommendations1,2 when sparging which will be addressed in future blog posts.

Many opinions on the effect of dissolved CO2 on the perception of wines exist and researchers from The Australian Wine Research Institute conducted a formal study to elucidate the exact effects of which the results were published in a paper titled, “Effect of dissolved carbon dioxide on the sensory properties of still white and red wines”3.

In order to determine the effect of different CO2 concentrations on the sensory experience of the wines, the CO2 contents of the wines were adjusted to different levels (Table 1). Different CO2 levels were obtained by either blending the control wine with the same wine saturated with CO2 (increase) or with the same wine which had been entirely decarbonated by sparging with nitrogen (decrease). The white wines’ pH values were standardised after carbonation. No pH adjustments were needed for the red wines. After resealing the bottles, the wines were stored at 4°C for up to 48 hours prior to sensory assessment. The temperature of the white wines at the time of the sensory assessment was approximately 10°C, while the red wines were evaluated at approximately 23°C.

Table 1. The average concentration of dissolved CO2 in the white and red wine treatments after CO2 adjustments3 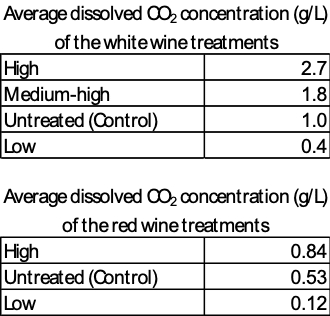 Loss of CO2 from bottle to glass

A preliminary test was conducted to investigate the change in dissolved CO2 concentration when the wine is poured from the bottle to the glass.

Results showed that there is a significant loss in CO2 during this process. The pouring of the wine from the bottle into the glass led to dissolved CO2 decreases of up to approximately 0.5 g/L. For the 20-minute duration after pouring, the dissolved CO2 concentration in the wine continued to decrease slowly and resulted in the decrease of an additional (approximately and up to) 0.5 g/L dissolved CO2. There were also differences in dissolved CO2 concentration of poured wine (in different glasses) from the same bottle. This in-glass variation is likely caused by differences in the amount of agitation while pouring. These losses and differences can be significant and should be considered when conducting sensory evaluations. The sensory assessment of the current study was conducted within two minutes after pouring the wine to minimise the loss of dissolved CO2.

The effect of dissolved CO2 on various sensory attributes

Some of these results differ when compared to similar studies conducted in CO2 saturated samples. Keep in mind that this study was performed to investigate the effect of dissolved CO2 on still wines (lower dissolved CO2 range), and not sparkling wines (saturated dissolved CO2).

The sensory interactive effects and the way the tasters perceive the wine as a whole should also be considered. For example, if a beverage tastes sweeter, it tends to also taste less bitter. However, the physiological mechanisms underlying dissolved CO2 induced reduction in bitterness and increase in sweetness still needs further investigation3.

Some contradicting results were reported in the study3. I decided to rely on the interpretation of the results by the authors (as specified in the text) and assumed an error in one of the figures.

Photo by Gerard Richard on Unsplash