BIB vs Bottle: Why does the same wine taste different? 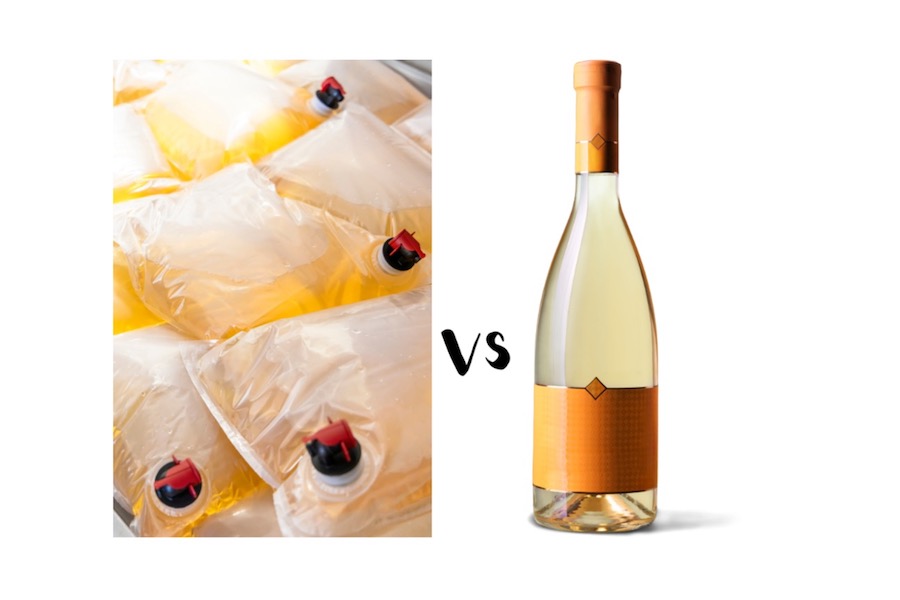 Bag-in-box (BIB) packaging facilitates selling wine in more affordable packaging as well as selling wine in larger volumes compared to a glass bottle. While boxed wine is thus generally cheaper than bottled wine per litre, the price difference is due to the packaging, and not necessarily the wine it contains. Many cellars sell the same wine in both bottles and BIB. But a difference in the sensory experience of the wine packaged in the different forms is often perceived. So, the question is:

The answer is that the type of packaging can influence the wine components and the sensory experience of the wine. The same wine can thus taste different if bottled in glass when compared to it being packaged in BIB.

There are a few reasons why this can occur:

During the winemaking, oxygen exposure is usually avoided as far as possible, especially during the vinification of Sauvignon blanc wines. Not only can oxidation modify key aroma compounds, such as the fruity varietal thiols, but it can also result in the development of oxidation aroma and browning. The typical Sauvignon blanc aromas that we know and love are sensitive to oxidation and will oxidise if there is too much oxygen present. When it comes to BIB vs glass bottle the difference comes in the

The process of filling the plastic bag vs the process of filling the glass bottle differs significantly, especially in terms of oxygen exposure. Oxygen management during the filling of BIB is more of a challenge compared to the filling of glass bottles. The biggest oxygen contributor in BIB is the ‘headspace bubble’. The headspace bubble refers to the air ‘space’ that remains in the bag once the filling is complete. After filling, BIB usually has a relatively large headspace to wine volume ratio, resulting in more (total package) oxygen being present in the sealed BIB when compared to the (total package) oxygen in the sealed glass bottle (which has a smaller headspace to wine volume ratio). The oxygen bubble remains roughly the same despite the size of the packaging. Therefore, potential headspace oxygen problems become more acute with smaller volume BIBs as the size of the bubble remains constant regardless of the bag size.

In terms of permeability, glass (and screw cap) allows very little oxygen to enter the bottle, while, over time, the plastic bag might allow more oxygen to permeate and end up in the wine. Other than that, “weak spots” such as the seams of the bags and around the tap might also result in increased oxygen ingress.

Due to the increased risk of oxidation when packaged in BIB, producers opt to elevate the sulphur dioxide levels (a very efficient antioxidant) to preserve wine and maximise shelf life.  Relatively high concentrations of sulphur dioxide do, however, have a direct impact on aroma and taste: the flavour is often subdued, and the wine is perceived as tarter, harsher and less supple.

Absorption by the plastic bag

Depending on the type of plastic used, some of the aroma compounds might be absorbed by the plastic, resulting in the wine tasting less aromatic compared to the same wine packaged in glass. This is especially amplified with increased storage temperatures.

Consumers tend to store wines in suboptimal temperatures when packaged in BIB. Often, BIB wines are stored at room temperature compared to the 750 mL glass bottle which usually gets refrigerated. Even though the wine will not “spoil” at room temperature the preservation of the typical Sauvignon blanc aromas is more efficient when stored at low temperatures. At higher storage temperatures, the natural degradation of wine aromatics takes place at a faster rate.

Other than the storage conditions, consumers keep an opened BIB for a longer period of time (and unrefrigerated) compared to an opened glass bottle. The effect of oxidation over time is thus more noticeable.

Even in normal “still” table wines the carbon dioxide levels are critical for the sensory experience of the wine. If a wine contains too much dissolved carbon dioxide then the wine might taste spritzy, while too low concentrations will leave the wine tasting flat and lifeless. When producing Sauvignon blanc, a slightly higher carbon dioxide is usually desired as it supports the aromatics and fresh acidity. Unfortunately, there are carbon dioxide limitations when packaging wine in BIB. Variations in temperature and atmospheric pressure (especially during transportation) will cause the BIB to expand and contract. To avoid pressure variations and leakage under these variable and often uncontrollable conditions, the wine’s dissolved carbon dioxide content needs to be lower than what the producer would prefer. Therefore, before packaging the wine in a BIB, some of the carbon dioxide is removed. This affects the wine sensory perception, often resulting in the wine tasting flatter and less aromatic and lively compared to the bottled counterpart.

Even though the same wine can be packaged in BIB, the consumer should be aware that the wine will, most likely, not taste exactly the same as its bottled counterpart. However, with meticulous quality control by the producer, packaging suppliers and fillers, the difference in the sensory experience of the wines in the different packaging can be minimised. 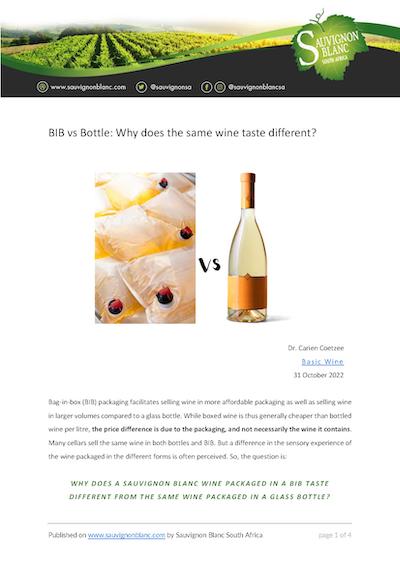